For all of those room escape fanatics out there, we’re thrilled to announce our new “Twister” room escape by DOA is open at Wilderness on the Lake. 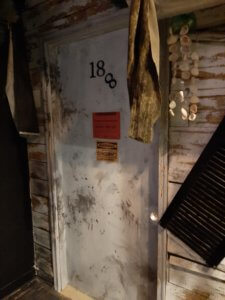 The scene for this new room escape starts on April 3, 1974 at 4:40 pm when the first tornado hit the town of Xenia, OH. Participants have only 60 precious minutes to find and retrieve valuable items from the massive tornado’s wreckage, and to get safely to shelter before the second twister hits.

For an added twist, we dare you to try the 🌪️TWISTER ROOM ESCAPE BLACKOUT EXPERIENCE. In this scenario, you will be left in the darkness, wearing only a small headlamp and will still have just 60 minutes to solve various clues and puzzles to see if you have what it takes to survive the oncoming F5 tornado.

The new room replaced The Basement, and is geared for ages 8 and up. It costs $29 for resort guests and $34 for the public.

The resort’s other room escapes include the Titanic geared for ages 8 and up, and the Circus which is suitable for families with children under the age of 10.

For more information on the room escapes visit: https://www.wildernessresort.com/attractions/d-o-a-room-escape/